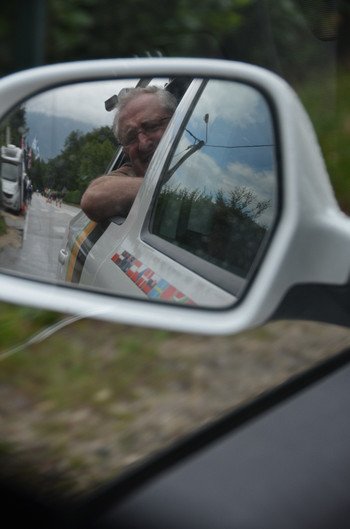 Photography is a passion whether it is sports, people, travel or whatever is in front of me.

My appreciation for cycling started at a young age growing up on a hill farm in Ireland. Dad was always out and about so to go to friends’ houses or to play hurling at our local club in town, I needed transport.

My uncle Jim owned a bike shop in Kilkeel; the local town and I received my first bike around 4. The rural roads meant that safety wasn't an issue and I used my bike all the time.

In the 80’s, the Irish owned cycling or so it seemed. Sean ‘the King’ Kelly was my hero. Very similar upbringing but he was a global cycling superstar and Paris Roubaix was and still is my favourite race especially in the rain. Sean won it twice. In Ireland, we didn't have cobbles but we had rain and roads with grass growing down the middle, but I tried pretend.

Stephen Roche was a townie from the big city and he just didn't click with me but I was still screaming at the TV on La Plagne along with Phil Liggett with those famous lines Its Roche… It’s Stephen Roche.

I have had the opportunity to ride all over the world, the famous climbs in France, Spain and Italy as well as a few further afield in the US. Alto del Angliru in Spain is by far the hardest climb I have ever done, but the hardest day on a bike was the pan flat roads of Northern France that make up the Paris Roubaix race.

I have always been interested in photography as a way of creating lasting memories. I bought a Nikon F90 film camera and a few lens while living in NY and used them on multiple West Coast tourist trips. My first experience of sport photography was when, I travelled home from San Francisco to watch the Tour come to Ireland in 1998 and stood beside Richard Virenque while we both collected our bags at Dublin airport not knowing the media storm, he and his cohorts were going to start ruining the whole tour.

Coming back to the UK in 2000, life took over and the camera was put in storage but  my cycling increased. Regularly attending the Spring Classics with my kids/partner, the Tour de France and Italy were always the highlights of the year. I have cycled with Cavendish, the Schleck brothers and sat in the Columbia team car during a TT in Grenoble the year Cav won the green jersey. I am a cycling fan and have watched so many races I try to anticipate the action to get into the right place to take a photo.

I bought a Nikon D3 then a backup D700. Speed of the camera is so important as the peloton flies by in an instance. I am currently using a Nikon D5 and D500.